How I Got This Body: Quitting Lifetime Movies and Going From 186 to 145 Pounds by Running 16 Marathons in Four Years!

In 2012 one of my sisters ran her first ultra-marathon. I remember running alongside her on the course—she was about 45 miles into the race and I was uncomfortable and breathless after just a few minutes of moving. The realization I came to that day, of just how much I had neglected my health, was the defining moment for me. I registered for my first half marathon, which I completed later that same year in September, on my 33rd birthday.

“The feeling I had crossing that finish line, after what felt like the most challenging physical experience, was life changing. I returned to the gym and signed up with a trainer at Sport&Health for three months, and committed to running my first marathon a year later." I’ve lost 11% body fat. My body has changed and sometimes I don’t see the changes, but I feel the difference. I move better. I lift weights I never imagined possible.

Working with my trainer, we did a lot of compound movements and interval training. We focused on lower body strength: deadlifts, squats, lunges, with functional exercises and plyometrics. To date, I’ve ran 16 marathons and 5 ultra-marathons between 2013 and 2017. My current routine aligns with my running goals now, as I recently completed my first 100k race and am training for my first 100-mile race.  My advice to others “Take the first step and don’t look back!” Thomas started training with EP in 2014 to fulfill his dream of representing the USA in the 2018 Winter Olympics. As a result of his dedication to training on and off the ice, and under the expert guidance of his EP trainers, Thomas was able to increase his power, strength, mobility and core to help him set a new World Record in 2016-17 in the 5000-meter speed skating relay and qualify for the 2018 Winter Games in South Korea.

Using Olympic lifts and specialized Keiser pneumatic equipment, his training was an integral part of his athletic development. Thomas has had the opportunity to become a champion because of his commitment to all aspects of his athleticism, which led to incremental improvements while staying healthy to train and compete on the international level.

This past October, two Alexandria residents attended the 2017 World Triathlon Grand Finals in Rotterdam, the Netherlands and finished in the top twenty of their age group category. Lawrence (Larry) McAndrews finished 10th and Francis (Mike) Schauer finished 17th. They were both competing in the Olympic-distance event for males ages 70-74.
The athletes agree that they have different strengths, and training together has helped them push one another further.

Mike and Larry both work with personal trainers and instructors at Old Town Sport & Health club in order to cross-train effectively!

Although Crawford has always loved water sports, she found her passion for competitive dragon boat racing as an adult after a period of relative inactivity due to the demands of running her own business.

“I was desperately looking for outlet to give me a bit more balance in my life,” Crawford said. “I was consumed by running a business I had started.”

Crawford, a two-time breast cancer survivor, first round out the sport through a friend who was part of GoPink!DC, a Washington-area dragon boat team for women who have either survived breast cancer or are currently undergoing treatment.

This past October, Jane paddled with two different teams for her Senior B (50 plus) age division, an team and a mixed team. This was her second time competing in the championships.

Jane takes Tabata and conditioning classes at our health club with Trainer Evie to improve her athletic foundation. 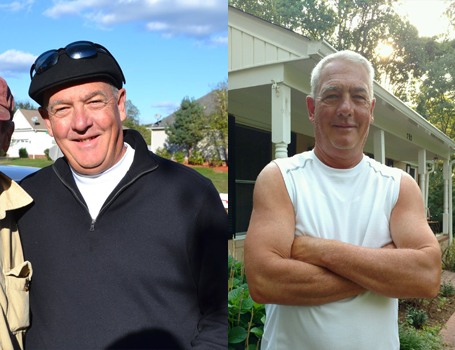 Brad, age 60, lost 30 pounds, lowered his blood and restored his pride and confidence in himself – and also fit back into his favorite pants!

Like many , I woke up feeling heavy, out of shape and unable to fit into my favorite pants. As the saying goes, “I thought getting old would take a lot longer!” I guess you might say that was the same attitude I had about getting out of shape.

My wife and I made the decision to start working on feeling better about ourselves. I was also determined to fit back into my favorite pants that I refused to throw away! After an initial consultation, we were given a tour and were shown how to use the equipment. We felt assured that if we ever had any questions, all we had to do was ask!

Since then, I have been coming in usually three times a week. We attend yoga and Pilates classes as a couple and my wife enjoys going to the dance fitness classes. We engage by varying our workout routine. In addition, the staff is without exception, knowledgeable, approachable and always motivational.

Brad and his wife stay active by attending group fitness and mind/body classes together, as well as doing a combination of weight training and cardio at their local health club.

Muneer went from 200 to 165 pounds and lost several inches off his waistline in four months.

I bordered obesity before I had started training with Roosevelt. I slept poorly, felt body paints and lived in a state of general lethargy. mental health didn’t fair much better than my physical health, as I struggled with anxiety and a falling self-image. I felt out of control from my body and recognized that I needed help to make a drastic change.

I started training three times a week and before I knew it, two weeks had passed by and I was 8 pounds lighter and had lost 2% body fat. After losing over thirty pounds, my sessions with Roosevelt offered me more than fitness. He taught me why the workouts we did were effective, and how to think a exercise as a greater tool to improve several aspects of my life.

Muneer continues to train at our Sport & Health club with Roosevelt and focuses on increasing his strength, stamina, balance and flexibility.